Cubicles and privacy solutions in the age of Covid-19 And In The Beginning..

Over the past 4  decades the working environment has evolved from the drab 6 by 6 full height panels walls to lower heights solutions, and as of late to full on open plan systems with benching type stations and lounging shared workspaces. As much as the users of the traditional cubicles complained of their walled in cubicles, once their space was cut by more than half and their privacy and concentration was sacrificed for the benefit of “collaboration”, and aesthetics and density (it has always been about density, the other two ideals were used to justify squeezing two employees where there once was one), the American office worker somewhat missed having their own space. Additionally, studies over the last decade have determined that open space plans decreased overall productivity in the workspace.  So, it was no surprise that cubicles were already staging a comeback of their own in last 3 years.  They were a compromise, a mid-height solution that gave privacy and noise suppression when seated but allowed visibility throughout office when standing.

With the onset of the Coronavirus pandemic, the density, collaboration and aesthetics appeals have all gone out the window. From both employers and employees’ standpoints, the new concern is health and well-being.   The open plan and benching systems, once all the rage, have become a liability and hazard and with good cause… Many of the non-paneled systems have users facing each other well within the 6 foot transmission range.   Sterilizing the office after every shift is logistically and financially unrealistic nor does it prevent the transmission throughout day. Testing workers by temperature or swab stick is unreliable if one is an asymptomatic carrier. If you don’t have an office yet or still seeking to outfit an office, or are moving soon, well you are the lucky few who can purchase a segmented cubicle system that can provide privacy and peace of mind.  The exceptionally keen business owner would seek out a system which has a stack on option so you can remove the top piece at later date when the pandemic is a thing of the past.  Many segmented tile systems have some sort of ability to achieve this but we utilize and stock the Herman Miller Ethospace line that was pretty much designed for just this purpose, so you can adjust height without complete dismantle. Any system from any manufacturer with this feature would be ideal. Below are some examples of Ethospace systems. You can actually see the segments in the vertical sections of the walls. 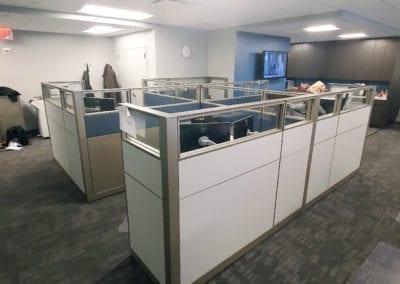 For the next 95% of business owners with furnished offices, your options depend on  your current setup. If you have cubes 52″ or above, you are sitting pretty. If you furniture falls below this height, you have options, but most of them are  neither quick and or excessively cheap and those options depend on  if you have low cubicles or open plan setups.

If you have low cubes that have the ability to be expanded upwards such as Ethospace, you can order stacking frames  new from the manufacturer.  The cost may be prohibitive as the new product will be upwards of  $700 a cube and the lead time will be out a couple months as things stand now. You can try to source the stack on components in the used marketplace, but matching color and fabrics could be tough. if you can determine where the office furniture was originally ordered from, that would be your best bet on discovering if either of these two options are viable. 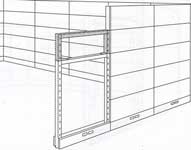 Another option is a complete switch out of the cubicles  and redesign. Although clearly the most expensive, this may be good for those who wanted to update and revitalize their office beforehand.   With the onset of the all the loans and grants that should be flowing to industry, it might be the perfect time to pursue this.

If time and money is your concern,  the best solution that achieves the goal without being prohibitively expensive both product and labor wise would be to add up-mount stack-on glass or acrylic dividers. While it would not be the most airtight solution as compared to option 1 or 2, it would be vastly cheaper and prevent a majority of mouth and noise derived airborne transmission and it would aesthetically be pleasing to boot. I would estimate that  product would  costs a minimum of  $300 a cubicle to bring the lower cube into the 55-65″ range. 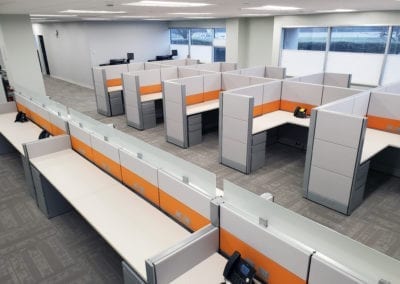 We at Davena can assist with any of the options mentioned above. We sell OEM Herman Miller stacking frames, several different inventories of mid-height cubes as well as the stack on glass dividers in a variety of heights and transparencies.

If you have open plan systems like benching or desks, your solution will be more costly, but achievable. The money you as a business owner saved at beginning by purchasing desking vs cubicles  may now be offset significantly by having to retrofit a makeshift solution.  We can supply and install up-mount desk and benching dividers and this would be the most cost-effective solution to the problem. Not a perfect one but the alternative is to either install panels between all desks or to toss the desking and revert back to cubes. 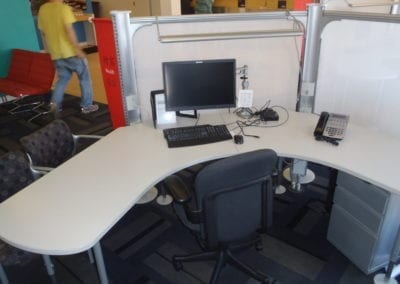 A failure to plan is a plan to fail

Only time will tell if this a 2-month thing or a yearlong debacle. But I can say this, if I was an employee, sitting in a desk facing someone else not 4 feet away from me, I would not be very keen on coming to work without a Tyvek suit and a full blown respirator. Or not all.

By being proactive and creating a safer workspace,  the costs associated  will pay for themselves, with less sick days, more secure workers and a more productive workforce. After almost 50 years, cubicles may not be the most modern solution in the office environment, but for many more reasons than just Covid-19, it’s still one of the most practical. Based on how many emergency temporary hospitals that were built using said cubicles, they certainly serve the purpose of isolating both patients and providing a level of protection from transmission… And I suppose if it’s good enough for the healthcare industry to feel confident in keeping patients safe, it has got to do just about as good a job protecting your employees.